Time-wasters come in all sorts of different shapes and sizes. Movies might be the epitome of entertainment, but there are many other ways of imploding hours upon fantastic hours.


The movie tie-in industry that blossomed, withered, and died in the 1980's and 1990's saw some rather unorthodox entries into the entertainment market. Some were spectacularly successful: the Star Wars paraphernalia market dwarf the revenue from the movie ticket sales by a factor of 25. Others were not so. The 1982 ET game for the Atari console has since become the gold standard for hubris and vanity projects, not to mention it ultimately crashed the video console industry itself.

However, some tie-in products are so peculiar, bizarre even, that the items still carry a novelty value due to their very eccentricity. We have previously mentioned the offbeat 2010 Graphical Action Game and the even more mystifying 2010 Text Adventure Game. Perhaps stranger still was the oddball 2010 tabletop role playing game released by Wisconsin-based, original Dungeons & Dragons publishers TSR - or Tactical Studies Rules - in October of 1984.


The Game and Box Contents 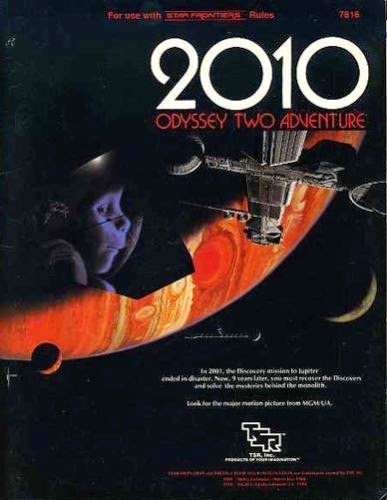 Loosely based on the plot of the novel 2010: Odyssey Two, the game was released as part of the Star Frontiers science fiction series begun by TSR in 1982. The game box came with a lot of game playing material, and expanded the 2010 universe quite commodiously. The rule book addition was a rather hefty 32-page document, detailing many elements of the game setting such as the Jovian system and even the moons. For the first time floor plans for the Discovery XD-1 space ship were made public. Many players bought the module for this reason alone.


The Discovery plans are consistent with both the movie 2001 and the movie 2010, plus they reveal details that can only have been known to the production designers, such as the water tanks and the radar dome that can be found in the original plans from 1966 (although the HAL 'Brain Room' is on the wrong side of the ship). This leads us to believe the module producers were closely collaborating with the movie producers. It is however not known whether graphic designer Ruth Hoyer was given access to the movie material. TSR has never revealed the extent of the collaboration, nor indeed if there ever was any. The Russian space vessel Leonov's ship floor plans were also part of the package, of course.


Other peculiarities included lengthy bios for the characters on board the ships. Some of the biographical information was naturally geared towards the game canvas, but some information was more general. This is the only place we find out, for example, that the Russian commander - captain Tanya Kirbuk - is 37 years old, or that engineer Walter Curnow is explicitly second-in-command on the Discovery. It is unknown at present whether the information was gotten from movie director and original script writer Peter Hyams, whether it was conjured up by module writers Curtis Smith and Bruce Nesmith (nowadays Director of Design at Bethesda Softworks), or whether it was straight from 2010: Odyssey Two novel author Arthur C. Clarke himself.

Even more strange is the inclusion of portraits of the characters, clearly taken by the movie production crew. Some of the pictures distributed with the game have never been published anywhere else - they are in fact copies of Polaroid pictures taken by special effects supervisor Richard Edlund during film production, further cementing the claim - or at least suspicion - that the TSR game producers were working closely with the MGM movie producers.

The widely held consensus among the D&D community is that plot-driven games created out of pre-existing properties commonly do not make great modules. The plot requirements demand a linear progression through the game chapters and segments - thus such an installment is often contemptuously called a 'railroad module' - and regularly does not offer much variation. Their replay value is frequently nil.

Another issue to keep in mind is the Star Frontiers game system does not usually lend itself well to slow-moving ruminations, it is rather better suited for quicker paced scenarios focused on battles and conflict.

However, the 2010 module - as well as the previous 2001 module - were created with the mentioned limitations in mind. The game system changes, as well as the minor plot enhancements, makes the module remarkably gratifying, even surprising in some facets. Both the Odyssey Sequence modules are similar in this regard.


But even here the 2010 game fares better than the game based on the previous film 2001: A Space Odyssey. The invisible rails that were extant in the 2001 game are of course present in the sequel, too, and they must be in order to maintain game cohesiveness. The sequel does however allow quite a lot of divergence from the plot.

To offer an example, the repair of HAL-9000 might fail, and the computer can despite the player's efforts duly return to it's psychotic, homicidal state.

Trying to save a derelict spaceship while a treacherous super-computer - hell-bent on your forthcoming demise - is running the show is not really how the novel panned out, much less the movie. Yet, the gruesome scenario is most certainly possible in the game, and makes for great entertainment.

Other minor deviations exist, such as the possibility the players - both PC and NPC players - might receive additional orders, all of which have the same tone as the Cold War narrative in the movie. The information presented to the players is obviously expanded beyond the scope of the linear narrative of both the novel and the movie.

All in all, the 2010 Odyssey Two Adventure is an enjoyable module, and as a player-only experience offers a solid, well-crafted romp through the Solar System. Additionally, for the game referee it presents a quite finely balanced, consistent system and is a sturdy foundation upon which to create Hard Science Fiction adventures and scenarios.

Requiring both the basic Star Frontiers box set Alpha Dawn and the Knight Hawks expansion in order to be playable, the game itself places the players right in the middle of the universe of 2010. The plot-driven game that comes with the package follows the basic plot of both the novel and the movie to a degree, and is rather standard role playing fare, albeit well crafted. The real value of the package lie in the character skill sets and the game setting, both of which can be used to create interesting game creations of your own.

When re-assessed in retrospect, the main buying incentive of the modules has proven to be the deck plans of the two spaceships - causing even non-gamers to buy the module - and to a somewhat lesser extent the mechanism of the new skill sets and the rules expansion to the underlying Star Frontiers system.

The module is rather rare these days. Original manufacturer TSR went bankrupt in the late 1990's, and the production runs were not huge. This means the odds of finding a mint copy of the game box is close to nil. It is rather recommended you buy one if you find one.

They sure don't make them like they used to. Whether that is good or bad is left to the discernment of the reader.