It was a long time ago Coleco was on anyone's lips, but during the lifespan of the company they managed to churn out quite a lot of product. Some of them were truly baffling.


Some of the oddest pieces of paraphernalia to emerge from the fringes of the media machine connected to the movie industry were the tie-in games. One of the strangest must be this one, namely Connecticut Leather Company's utterly forgotten 2010: The Text Adventure Game.


In the early days of personal home computing—an epic 30 years ago—a rather sizeable slice of the games market was commanded by the so called 'text adventure' genre. In the year 2015 that word combination means absolutely nothing, but when the movie was released—in 1984—the genre was still generating respectable revenue.


Perchance the most outlandish entry in the genre has to be the 1985 Coleco creation that places the player aboard—and outside—the Discovery. The game was designed by Colecovision's lead designer Michael Price and Bunnies & Burrows designer Dennis Sustare and was to be one of the absolutely last games released for Coleco's ADAM system. The system was killed less than a month after the game was released.

Very few people might remember it now, but as was common in the days of yore, the game was distributed on C-tape cassettes. The ADAM tape data format was however different from normal audio tapes and is partly to blame for the unpopularity of the ADAM computer/console. The ColecoVision games console was after all a run-away success, and was the main reason Coleco was pushing so hard for the ADAM, but the console crash of 1983 ultimately caught up with the company and relegated the ADAM into the footnotes of history.

Traditionally text adventures were played by entering verbal commands via the keyboard, typified by the proverbial "get lamp" entry. Howbeit the 2010 adventure had a fairly novel interface—the game was played almost entirely with the Smart Keys of the ADAM. Not a single word needed to be typed, and you could play the entire game with one hand on the Smart Keys. Movement was handled by the cursor keys, however. To make matters worse, pressing the "forward" cursor key at times moved the player forward in the direction he or she was facing (!), often sending the player helplessly flailing into the vacuum.


The game code and implementation was developed by Coleco staff developer Thomas 'Tom' Fulton. Being hired as developer on Coleco's game design staff, Fulton also worked on the other of Coleco's 2010 tie-in games, 2010: The Graphic Action Game. The games were utterly different and had no in-game, internal references. Lost opportunities are quite obvious. The documentation, however, contains some surprises.

It might be mentioned here that game designer, RPG author, and novelist Michael A. Stackpole cites this game as the first he ever worked on in the industry.

While the game sports scant graphics and is mostly text, graphics designer Frank Lam went to MGM/UA Studios at Culver City in Los Angeles to meet up with and consult with movie producer and director Peter Hyams regarding the opening screen and the victory screen graphics. Needless to say, at 256 x 192 pixels, the game artwork is less than stellar.

In addition to the thus officially sanctioned graphics, there were other innovations in the game as well, innovations also of graphical nature. Since the maximum resolution of the ADAM screen is 256 x 192 pixels, the development team created their own font handling routines in order to display more text than the 36 x 24 character width allowed by the operating system.


Coleco's in-house composer and sound designer Roland 'Ray' Rizzo's audio design is limited to creating a digitized PCM soundtrack of Richard Strauss' awe-inspiring Also Sprach Zarathustra, and inserting an endlessly looping breathing sound to the background. Even though the background sound is "dynamic", i.e. the breathing loop speeds up when oxygen supply is running out, many players found the breathing irritating and chose to simply turn the sound off. These days Rizzo is working for Firaxis, and the Coleco games were only a small blip on his radar, barely even registering. He does not even in his own words "know what the Coleco 2010 games are."


There are some peculiarities in the bulk text, such as the Russian pod Misha being depicted as red and bulky, the communications with Earth being direct, and so on, but these anomalies are not even noticable. The graphics are, when they are present, clear and serviceable. 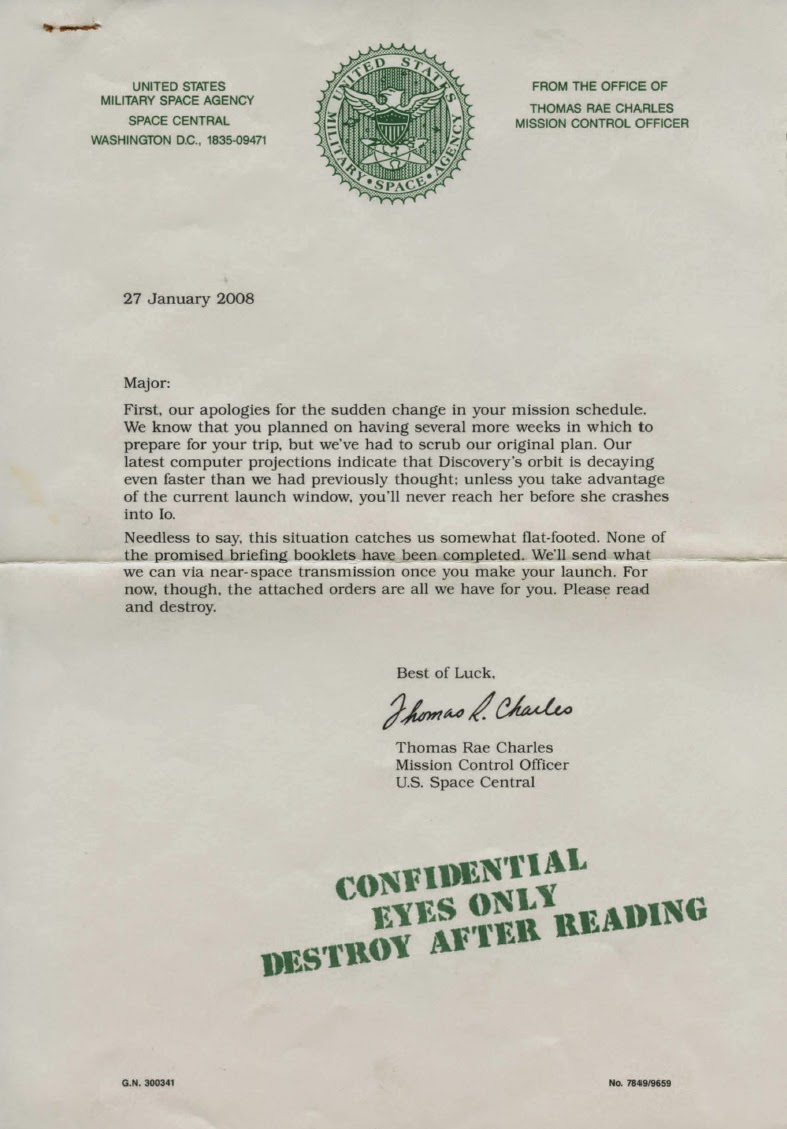 The game was fairly lavishly packaged for its' time, and it came packaged not only with the usual manuals and such, but also with an envelope containing a 'confidential' three-page memo—provided by a fictional Thomas Rae Charles, a mission control officer at the equally fictional "United States Military Space Agency"—outlining the game setting, providing a backstory and immersing the player. Those who had played the other official 2010 game—2010: The Graphic Action Game—might recognize the name of the officer. Indeed, the same fictional officer is mentioned in both games. This remained the only in-game reference between the games, and it was mentioned in the manual only.

The envelope also contained a note informing the player "it is not possible to store games on a blank data pack". This had some wider implications which will be mentioned later.

The player starts the game in Misha—the Russian one-man pod. From there, the player must enter the Discovery, find out what is ailing the ship, get her up to speed, and save her from the impending crash on the Jovian moon Io's surface and her obvious doom.

The in-game universe does not have a lot of similarities with the real universe, other than the names of the celestial bodies. The Jovian moon Io is at times referred to as "a planet", and moreover it is said to have a "fiery heart". Neither of those assertions are true in the real world. Sure, Io has a molten core due to gravitational pressure and the constant tugging by Jupiter, but to suggest that the Discovery would bury herself at the center of the moon upon impact is not really a plausible scenario. 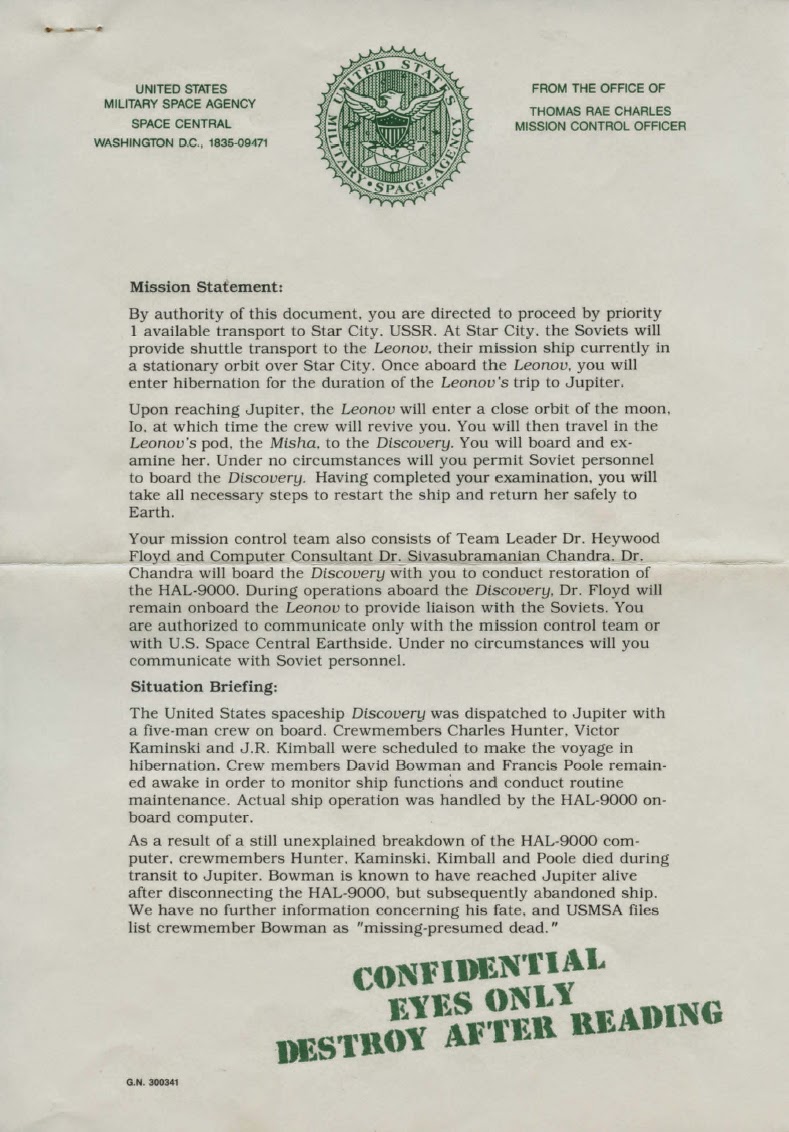 Consisting of only 42 game locations in total, the size of the game canvas is rather comical by the standards of today. To provide a little bit of context, the entire game occupies the same amount of RAM memory a single Windows desktop icon does today.

The perhaps most frustrating aspect of the game was the continuous loading of game data from the DDP. Tape drives were notoriously slow even for the day, and endlessly loading the game locations quickly became a game unto itself, of course ultimately becoming a test of patience and character.

If you really, really want to play this old piece of tie-in game history, several ColecoVision ADAM emulators—as well as the needed ROMs—are available on the Internet. Various ADAM fan sites exist, and many of them either host emulators themselves or provide links to sites that host them. Read the note at the end of this article, however.

Be advised emulators are mostly created by open source communities and hobbyists, and they are by and large of wildly varying quality. Also remember the majority of all ROMs contain copyrighted material, and as such they reside in a mostly grey area of computer media. Caution is advised should you undertake such an endeavour and it is strongly recommended you do not do it. 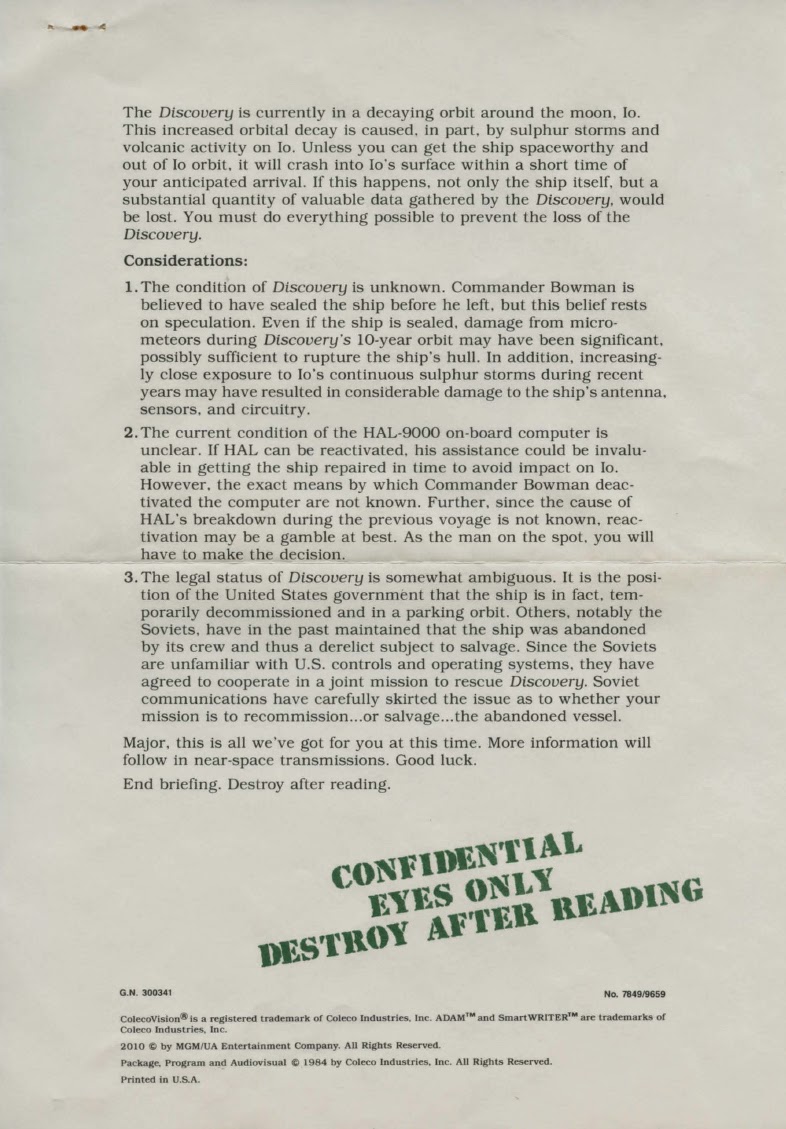 The original game was shipped on DDP—"Digital Data Pack", or C-tape for the rest of us—solely, and was never shipped on 5 1/4" disk by Coleco. No plan existed for any other format, at least not when the game was shipped. If any such plans existed they were shelved when the design team was disbanded later in 1985. Since Coleco itself would not survive the 80's, official disk versions of the game never emerged. Unofficial disk conversion were ultimately available for archivists, most prominently by Walters Software Co, but these came much later, and the legal status of all the available conversions remains unclear.

The game was released for (of course) ColecoVision's own ADAM, as well as the Apple IIc and Commodore 64 computers. Very few ADAM tapes still exist, since the ADAM tapes—or Digital Data Packs—could not be copied with a standard C-tape duplicator. The ADAM tape stations used the entire 0.15" width of the tape and the cassettes were thus almost impossible to copy with any other device. Only a few devices exclusively developed for bulk tape copying were able to create a copy of the data tape.


Where Are We Now?

There are ways to play the game on modern systems, using any one of the plethora of ADAM emulators that are available. However, since the ROM images required to play these older games mostly exist in the legally dubious twilight zone of distributed media, it is recommended you try to find an original ADAM and an original DDP tape instead.

Counter-intuitively they are not that hard to find; ADAM systems are found on eBay constantly. There are pictures in circulation of an ADAM system from 1985 being hooked up to a 50 inch flat screen 30 years its junior. The ADAMs are out there, and they are not expensive. Some are sold for as little as $10. You just need to know where to look.

If you can manage to get your hands on both a console and a 2010 DDP tape, fire the system up and appreciate the game for what it is: a delightful time waster.

Posted by Odyssey Archive at 6:00 AM